Let us help you take care of your vehicle.

Car Odor Removal – How to get rid of unpleasant car odors.

Have you ever noticed when you got in your vehicle and something’s just not right?

And what I mean by that is that there’s a very unpleasant odor or irritating odor that is just in your vehicle, and you cannot ever get rid of it. 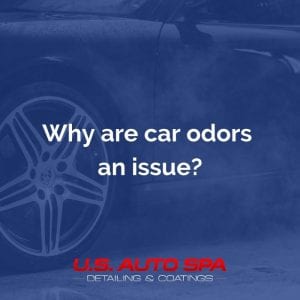 You may think, if you don’t spend a lot of time in your vehicle, what’s the big issue?

Well, according to the AAA Foundation for Traffic Study, the average driver spends about 292 hours in their vehicle every year.

If there is an odor in your vehicle, there is a problem that is causing it…

Why are car odors an issue?

Well, first and foremost, if there is an odor, that means that something’s not right in the interior of your vehicle. And this could be a multitude of things. 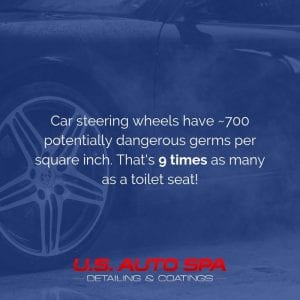 And that smell is never going to go down, it’s only going to go up, especially in the hot summer sun in Georgia.

If you have an odor in your vehicle, it’s definitely not a healthy environment, especially if you have young children. If you had an infant, a newborn. But if you’re bringing your newborn home from the hospital, very important that you don’t have any odors or smells or bacteria in your vehicle.

Some research studies have found that the interior of vehicles, especially the steering wheel, have up to 700 potentially dangerous germs per square inch.

How to get rid of car odors.

Here are some DIY solutions that you could try prior to contacting me for a detailed interior cleaning and odor removal services.

Mild odors in a vehicle, say you left a Chick-fil-A in your vehicle overnight, and we all love Chick-fil-A, but leave one in your car one night and open the next door, it’s not going to smell as good as it did that day you bought it.

Something like that is fairly simple to fix. You could leave the windows down and sprinkle some baking soda on the carpets and vacuum it out, that smell would go away.

Don’t ever let trash build up in your vehicle. 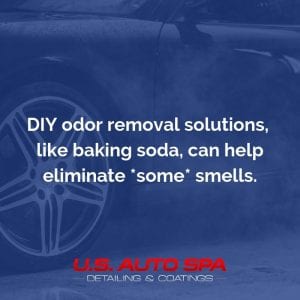 Don’t leave soda (or any food really) in your vehicle.

In the hot summer months, very important, never leave sodas in your vehicle, like Coke or Pepsi or Sprite. Why? Because what will happen with the bottles or cans is that they will heat up and explode all over your vehicle.

I know because I have had many clients contact me to clean it up. And a lot of times some of the stains from the Coca-Cola do not come out of the headliner.

Every time I do a car odor removal, I always replace the cabin air filter. It’s something that you can DIY. The cabin filter inside your air conditioning unit filters all the air moving through the ventilation system, just like your house filter does for your home air conditioning. If you go to YouTube and put in the make, model, and the year of your car plus “replace cabin filter” – you can often find a video showing you to replace it yourself. It’s very simple. And why pay the dealership 120, 150 bucks to do this yourself?

I do recommend, when you purchase an in-cabin air filter, pay a little more money, because there’s always two choices, there is a less expensive and a more expensive. The more expensive filter has better filtration. A lot of times it has a baking soda additive or carbon which filters the air better. It stands up better, and it does a better job overall. And it’s only maybe a few dollars more.

Do not cover up the smell! And NO VINEGAR.

One thing you don’t want to do is, if you have an odor, try to cover it up with Febreze or a deodorizer or a new car smell, because that’s just making the situation worse. And definitely, definitely never try to come after an odor using vinegar.

I don’t understand why on the YouTube everyone says, “Use vinegar.” I will tell you this, if you have an odor in your vehicle, listen to me, if you can fix it yourself, do it. But don’t try everything… eventually, if it doesn’t work, you’ll need me to come in and do both odor removal and correct any damage done by the DIY methods. So it’s a lot simpler if you would leave it to a professional.

Ozone machines are great. They only work generally in one arena, cigarette smell. They don’t work for other smells like mildew, soured milk, they don’t. 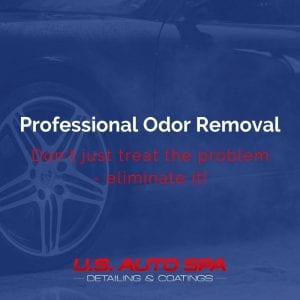 There’s a dangerous line with an ozone machine. Long durations of ozone treatments will permanently change the smell of the interior to something that you’re not going to enjoy. And you cannot get that smell out.

Number two, long term ozone treatments have been known to damage electrical circuitry and computer chips. So be very careful; you can just have an ozone treatment and the problem will go away.

To really remove odors, you’ve got to get to the surface. And what I mean by that, you have to have a deeper-than-interior detail.

You need to have thorough carpet extraction with a commercial carpet rated extractor of all the carpets and the seats if they’re cloth.

In our process of the interior in the odor elimination, we use a product that is 99.9% antimicrobial. This is a great product. Not only does it kill the germs that are there, but it also lasts for a year. It actually gives you a year of germ-killing power, which is great, especially when you’re going into the cold season or the flu season, especially if you’re bringing a newborn home from the hospital, or you have a parent that’s got a jeopardized immune system or breathing problems.

And what we do here at US Auto Spa, we have a secret weapon that we use. And to find out what that secret weapon is, give US Auto Spa a call, (770) 380-3261, because let’s face it, isn’t your family’s health very important to you? Is not your own personal health worth it to you?

If you have a smell, an odor in your vehicle, or if you have just purchased a pre-owned vehicle that has a cigarette odor that is irritant to you, US Auto Spa is very successful in eliminating odors. We do not cover them up. Our goal at US Auto Spa is zero neutral smell. Don’t smell. It doesn’t smell like a deodorizer. It doesn’t smell like the foul odor. Zero smell, zero neutral smell across the board.

Have you ever noticed when you got in your vehicle and something's just not right? And what I mean by that is that there's a very unpleasant odor or irritating odor that is just in your vehicle, and you cannot ever get rid of it. Say you try to cover it up with Febreze. So now it smells like Febreze

Check Out These Related Posts

Interior Detailing Can Help You Keep Your Kids Safe

Our kids mean the world to us, and we do all sorts of kind of things to keep them safe. One way to do so is to take care of our vehicles. Yes, you do regular maintenance, checking the brakes, the tires, and so forth, and you make sure that your little one is in the...

END_OF_DOCUMENT_TOKEN_TO_BE_REPLACED

Preparing for your end of summer vacation

It's summertime again. It's amazing how fast the year goes by. Your family, you're all ready to pack up the minivan and get your neighbor to collect your mail, there won't be any trash cans to take out. You're going to head down to the beach for two weeks to go visit...

END_OF_DOCUMENT_TOKEN_TO_BE_REPLACED

12 Tips For Keeping Your Vehicle In Top Shape

Every vehicle is an important investment and should be treated as such. We've put together some of our top tips for keeping your vehicle in great shape so you can enjoy it for years to come /or/ be able to sell it in a few years for more than you would be to...

END_OF_DOCUMENT_TOKEN_TO_BE_REPLACED

Since we provide mobile detailing, our service area is anywhere we want to drive. That being said, most of our customers come from the metro Atlanta area as well as all around Gwinnett county and Hall county. We have happy repeat customers all around Gainesville, Braselton, Buford, Flowery Branch, Lawrenceville, Sugar Hill, Berkeley Lake, Alpharetta, Johns Creek, Milton and other areas of Atlanta. If you’re interested in car detailing, ceramic coating, paint correction, or odor removal, schedule an appointment today. You’ll love the results.

Leave Us A Review